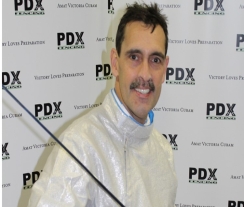 I grew up a gym rat, playing basketball, volleyball, wrestling, baseball and whatever was available.  Later in my parenting years, I pretty much gave up sports for myself and focused on my boys.  I coached them through youth baseball, enjoying living a little vicariously through them.  Once these years were over, we were looking for something new to do and we stumbled on the Olympic Sport of Saber Fencing.  We tried the family Groupon experience at PDX Fencing and both of my two boys loved it so we joined.  I spent a year watching them and then realized that, “Hey this looks kind of fun and I think I understand what’s going on!”, so I gave it a whirl.  It only took me a few weeks and I managed to sever part of my supraspinatus tendon in my right shoulder.  By this time, I was already hooked on the sport and so I thought, “Hey, let’s try this left handed”.  So with a bum right shoulder, I gave it another whirl trying it left handed.  Wouldn’t you know, shortly thereafter, I severed part of the supraspinatus tendon on my left shoulder as well.

I was without both of my limbs now and so I went to my doctor who referred me to Dr. Jason Kurian.  After going through the obligatory insurance required steps of physical therapy and cortisone shots, Dr. Kurian asked me what my goals were.  I told him that I had picked up this new sport of fencing and that I would like to compete in it.  Dr. Kurian attempted to bring my expectations down to earth.  So when I told him that the least that I would be satisfied with would be playing some ping pong with my boys, playing catch and being able to sleep on my side, he said, “Ok, I can help with that.”

Two rotator cuff surgeries later and months of grueling physical therapy (I think I have a little idea what torture is like now), I’m glad to say that my shoulders are serving me quite well.  To address the little successes, I can sleep on either side better than ever.  I find that if I keep my shoulders well exercised they are as strong as ever.

Onto the bigger successes that I’ve had:  Part of what Dr. Kurian accomplished was not just repairing my shoulders, but also fixing the problem that existed that caused the injuries in the first place.  The gap between the acromion and the supraspinatus tendon on both my shoulders was too small and arthritic with the edges of the acromion being very sharp.  So when I would lift my shoulder too quickly which is part of fencing, the acromion acted like a guillotine.

Once my therapy was complete, I picked up fencing where I left off and within just a few years, I’m now ranked in the top 20 in the United States in the Mens 50’s Saber category!  Because I’m oft injured (leg issues, hamstrings, thighs, etc.) I continued fencing with both arms and as far as I know, I’m not of aware of anyone else in the United States that competes nationally both right & left handed!  Although I’m right handed, I’ve actually had more success competing left handed.

Thank you so much to you and your staff, Dr. Kurian!  Every surgery you do matters.  I’m sure I’m just one of MANY patients out there that can continue living productive and enjoyable lives because when you get to work, you are “ON IT”!  The work you do requires you to be on the top of your game ALL the time and EVERY time!  I know its been a long time coming, but THANK YOU! 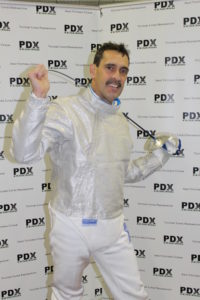 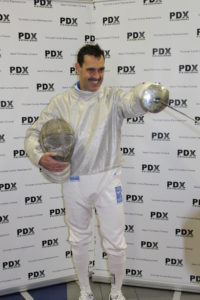